I've been using a Microsoft Surface Pro 3 as my primary work computer for about eight months, after upgrading from a Surface Pro 2 which I could never quite get used to for doing all of my work. The Surface Pro 2 was very portable, but a bit unwieldy and clunky for using at a desk. I held off on getting the Surface Pro 3 because I didn't think it would be so much better than the 2. In retrospect, I wish I'd gotten it the day it came out.

For work, I primarily use it as a regular laptop, although it works very well as a tablet for reading books, quickly checking email and similar tasks. It has a detachable keyboard, and attaching it makes it work in "desktop" mode, more or less. But one problem with Windows 8 is that tablet (or "Metro") mode and desktop mode are so different, and some tasks make you switch from one to the other and back again. Connecting to a wireless network, viewing images, and updating Windows all involve switching back and forth between desktop and tablet mode, if you start in desktop mode in the first place. It definitely is a bit confusing for me, even after using it as long as I have.

Windows 8 also doesn't have a Start menu. When you click on the Start icon, the one that normally opens the Start menu in Windows 7, it takes you back to tablet mode. To find the program you want to start, you then have to swipe up to get to the Apps screen, then swipe left to get to the second page of Apps icons ... yecch. I've mostly gotten used to these UI quirks, and I also installed a Windows 7-style Start menu application, but I was definitely interested in seeing how Windows 10 resolved these issues. On the other hand, I didn't want to find out by installing a prerelease version of Windows 10 on my primary work computer.

So, today, Microsoft rolled out Windows 10 for free to users of Windows 7 and up. About a month ago or so, Microsoft provided a patch to Windows 7 and 8 users allowing us to sign up to download the new OS and install it on release if we chose, or to install it later. I'd planned to install it later - much later - but tonight, I decided to just do it. Something today, I'm not sure what, reminded me of the first time I installed Windows 2000, and how much fun I had playing around with IIS 5 and the other new features.

Before installing a new OS, I like to take a system image just in case something goes wrong. Windows 8.1 has a way you can do this, in theory, but it's pretty well hidden away. I'd never used it, and I still haven't - I couldn't get it to work. I did get it to return several different eight-digit error codes, but apparently there are lots of reasons why it might not work, and not many explanations about how to fix those reasons. Not exactly an auspicious start, and after a couple of hours trying to get it to work I just gave up and decided to do the install anyway.

On the bright side, the install itself was the smoothest OS upgrade I've ever seen. It just worked. It took about half an hour for the actual install - the download had completed automatically well in advance. The install went through three phases, and rebooted the computer a couple of times, but that was it.

After the reboot, I was prompted to log in with the same account I'd used with Windows 8.1 - an online Microsoft account - and was able to log in with the PIN I'd previously set instead of the account password. Next, I was asked about some default programs and data collection by Microsoft. After all that, I reached the desktop, which looked somewhat similar to the previous desktop, but not identical - the taskbar has a search box, and the system tray icons are high-contrast compared to their predecessors. 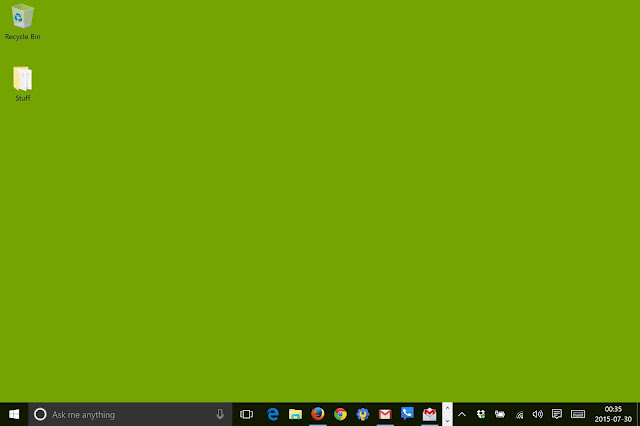 The Start menu is actually ... a Start menu! It's kind of an interesting mix of desktop and Metro tile functionality, and you can pin your own tiles to it, which is good enough for me. It didn't automatically add the items I'd previously pinned to the Start menu, but since I'd been using a third-party Start menu in Windows 8.1 I shouldn't be surprised. 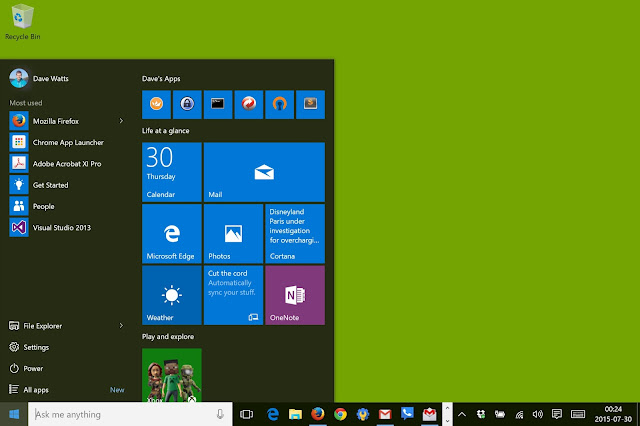 Next to the Start icon, there's a search box. When you click into the search box the first time, you'll be prompted to set up Cortana, which so far looks like Microsoft's version of Siri and Google Now. 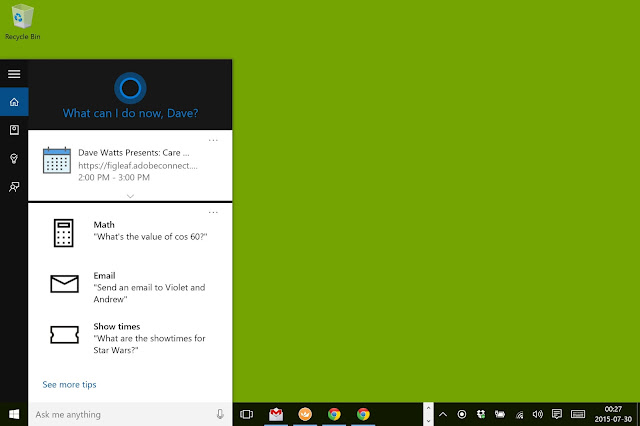 Next to that, there's a "Task View" button that shows you one or more desktops, each with whatever windows are open on them. 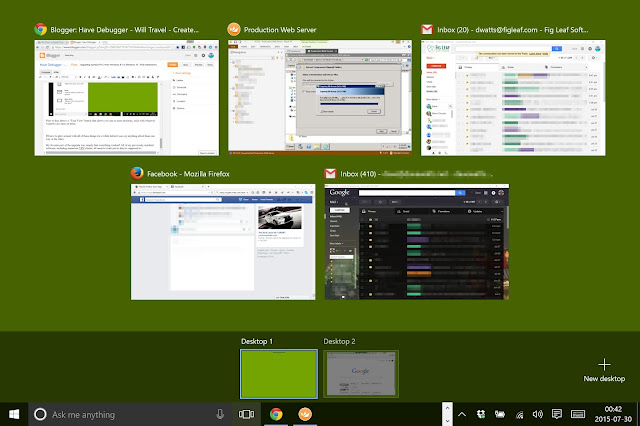 The last thing I've looked at so far is the new browser, Microsoft Edge. Windows 10 still comes with Internet Explorer for legacy use, but the default browser is Edge. I haven't used it enough yet to draw any conclusions other than "one more thing for web developers to test against". 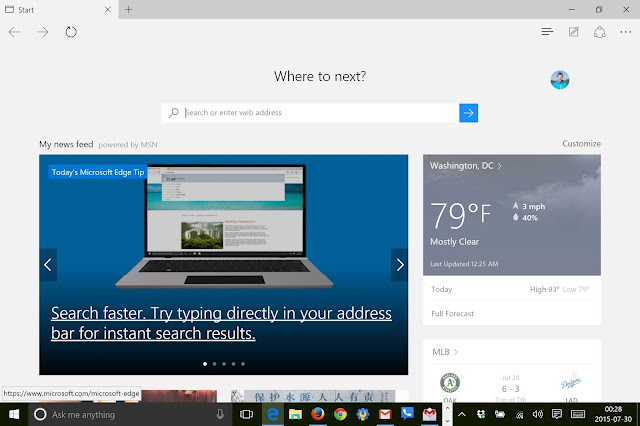 I'll have to play around with all of these things for a while before I can say anything about them one way or the other.

My favorite part of the upgrade was simply that everything worked! All of my previously installed software, including numerous VPN clients, all seem to work just as they're supposed to. Performance seems good so far. I had good performance with Windows 8.1, and this seems to be about the same.

So far, I'm glad I did the upgrade. For people running Windows 8.1, I think Windows 10 is a sensible upgrade that addresses some of the internal UI contradictions that many people complained about. I don't plan to upgrade my Windows 7 desktop just yet, but I think Windows 10 is a better fit for desktops than 8.1 was.
Posted by Dave W at 01:11

Email ThisBlogThis!Share to TwitterShare to FacebookShare to Pinterest
Labels: Windows